Crane ship for bridge construction in use

28/05/2020 | In May, the crane ship from Felbermayr hydraulic engineering was used for the construction of a temporary bascule bridge for pedestrian and bicycle traffic. The installation became necessary due to the renovation of a road in the area of the Kuchelau marina between Vienna and Klosterneuburg.

With a length of 126 metres and a width of 11.4 metres, the crane ship from Felbermayr hydraulic engineering is very versatile. Thanks to a loading capacity of 3500 tonnes and two extendable stilts for holding on station in water flows, it is also ideal for salvage operations, specialised civil engineering work on inland waterways and bridge building. What makes the special push-lighter unique, however, is a crane positioned on the deck. This crane is mobile, has an approximately 37 metre long jib and a lifting capacity of 200 tonnes. In May, the vessel operating under the name "F 131" was used to build a temporary bypass bridge. This enabled foot and bicycle traffic to be diverted over the Kuchelau marina. Bridge sections can be raised thanks to the bascule bridge design. This allows boats to pass through the bridge.

"The prerequisite for the erection of the temporary crossing was the driving in of a total of eight pile moorings", describes Felbermayr division manager Hans Wolfsteiner. These piles were rammed vertically into the riverbed and later served to support the bridge structure. "The pile driving had to be done with precision down to the last centimetre," Wolfsteiner remarks, explaining that these 17-metre long, three-tonne pile moorings had to be rammed into the ground with an accuracy of a just few centimetres. Otherwise the bridge construction would not have fitted properly. This was made possible by the precise positioning of the crane ship by means of GPS and subsequent fixing to the river bed by means of two stilts. A template was attached to the side wall of the ship. This served as a guide for the crane operator for setting the pile moorings with the crane. To fix the pile moorings sufficiently, they were rammed about seven metres into the riverbed. A pile driver with a seven tonne operating weight was used for this.

Lifting in the bridge sections

The bascule bridge essentially consists of two panel bridges, each about 30 metres long - these lead from the left and right banks respectively to the middle of the river. In addition, a platform was placed on the pile moorings - this was mounted between the two panel bridges in the middle of the river and later accommodated the two elements of the actual bascule bridge.

However, in order to be able to assemble the components, they were first transported from the port of Albern to the construction site. As with the pile moorings beforehand, this was also done with the special push-lighter. Incidentally, Felbermayr is also the operator of the Albern heavy goods port. "This makes things a lot easier," comments Wolfsteiner, adding that this was also where the bridge sections were finished by the bridge construction company Waagner-Biro. The lifting in of the bridge sections was carried out with the ship's crane. Wolfsteiner adds: "With a radius of about twenty metres, the crane easily handled even the heaviest parts, weighing 20 tonnes. The cooperation with Waagner-Biro technicians and the local fitters was also seamless:  "Textbook," Wolfsteiner says happily. So, the bridge was ready for operation after about two weeks and the construction site thus completed.

The bascule construction enables boats and ships to pass the new bridge without obstruction. 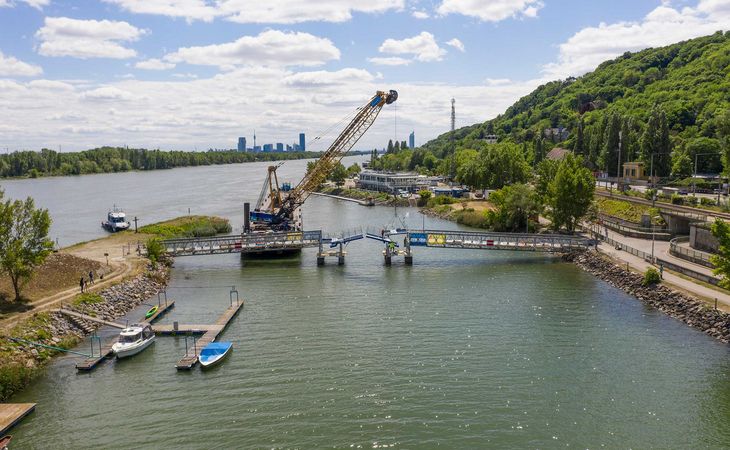 The crane on the special push-lighter lifted in the components, which weighed up to 20 tonnes.

With its 126 metre length and a load capacity of 3500 tonnes, the crane ship from Felbermayr hydraulic engineering is pre-destined for operations like this.

Each bridge component could be precisely positioned by means of GPS and the experienced crane operator. 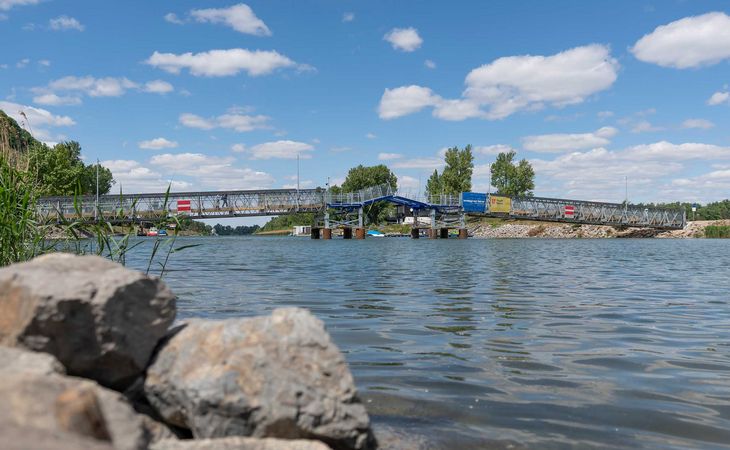 To fix the bridge in place sufficiently, eight pile moorings were driven about seven metres into the riverbed.

Thanks to the superb cooperation of all involved, the temporary bascule bridge was ready for pedestrian and bicycle use in just a few weeks.
PreviousNext