Showdown of heavy lift logistics for the petrochemical industry

11/01/2021 | Felbermayr and its subsidiary companies Bau-Trans and Haeger & Schmidt recently put the combined force of heavy lift logistics into effect for Hungary's largest corporate group. This involved the transportation of around 100 components in dual traffic right across Europe to Tiszaújváros, north-east of Budapest. The assignment, with piece weights of up to 400 tonnes, was completed in mid-May.

Roughly 170 kilometres north-east of Budapest, the Hungarian oil and gas group MOL is constructing a plant for preliminary products used in the production of plastics – a polyol plant. “This is a flagship project for us, in which we can employ almost our entire range of heavy lift logistics,” enthuses Peter Stöttinger. As managing director of Felbermayr Transport- und Hebetechnik, he also played a decisive role in ensuring the assignment was a success: “Working together with our client, the project department of Schenker Deutschland AG, I began developing a logistics concept for the petrochemical plant around three years ago”. Because the plant is being built “on a greenfield site” not far from the town of Tiszaújváros - home to 20,000 residents - the first step was to plan the necessary infrastructure. This included constructing a heavy-duty jetty on the River Tisa for inland waterway vessels. Furthermore, it was necessary to build an approx. 1,000 metre long temporary access road from the transshipping point to the nearest public road. From here, it was around eight further kilometres to the site of the plant, which is the size of 56 football pitches.

The starting points for the oversized cargo consignments were primarily in Belgium and Italy. “The shipments from Belgium, for example, were transported by our subsidiary Haeger & Schmidt using inland waterway vessels”, says Stöttinger, explaining that these consignments were principally transported via the Belgian canal system, the Rhine, Main–Danube Canal and Danube to the Felbermayr heavy lift terminal in Linz. Intermediate storage followed here if necessary, in order to optimise the logistics chains. This was the case, for example, with a column approx. 30 metre in length and 8 metres in diameter. After an intermediate stop in Linz, this component - weighing in at approx. 200 tonnes - was transported on the company's own Lastdrager 30 (ro-ro capable heavy-lift lighter) along the Danube to the mouth of the Tisa, close to the Serbian town of Titel. A detour, one might think. However, transshipping from the Danube to the road in Budapest was not an option for onward transport to Tiszaújváros – transport by road would have been technically impossible due to the dimensions of this column. It was therefore necessary to select the destination ports of the components according to their dimensions. The transshipping of “roadworthy transports” onto low loaders took place in the Hungarian Danube ports in Gönyű and Budapest, after which they were transported directly to the construction site. This comprised around 25 special transports. Some of these were driven in convoys of up to five vehicles and reached their destination in Tiszaújváros after several night-time stages. Components delivered from Italy made their way via the Romanian Black Sea port of Constanta. The journey continued via the Danube and Tisa, to the transshipping point in Tiszaújváros.

Those transports that arrived at the construction site by water were once again transshipped for the final part of their journey. An LR 1750 with main and derrick boom as well as ballast wagons was used, to guarantee the lifts with the steel giants weighing in at several hundred tonnes. “With this equipment, the crawler crane achieved an operating weight of around 1,000 tonnes”, explains Stöttinger. This generates enormous pressures that have to be dissipated into the substrate. A fact that was also taken into consideration when the crane site was built.

Upon arriving at the temporarily constructed port in Tiszaújváros much had been achieved, but the goal had not yet been attained. No effort could be spared in going the proverbial last mile. As such, two self-propelled modular transporters - each with 18 axle lines and 500 horsepower - were on site to take care of the deliveries. Tractor units with semi low-loaders and vessel beds were used for lighter components weighing up to around 100 tonnes. “The heavy transports were completed in mid-May with three pieces of equipment, each individually weighing several 100 tonnes”, Stöttinger recalls a further highlight. It was still necessary to statically calculate and support a bridge on the route to the factory, in order to withstand these steel giants.

And then it was complete – around 100 heavy transports had been successfully driven across Europe in roughly five months. Despite low water levels on the inland waterways and a pandemic with border closures, the project was completed on time thanks to dedicated employees and the best possible personnel planning. Stöttinger comments: “It was a logistical challenge. We have proven quality cooperation with the employees of Bau-Trans Hungary, who provided the special transports by road, including the approval procedure and the construction site coordination on location, as well as the inland water transport specialists at Haeger & Schmidt”. This brought the petrochemical plant a big step closer to its planned completion in the coming year. 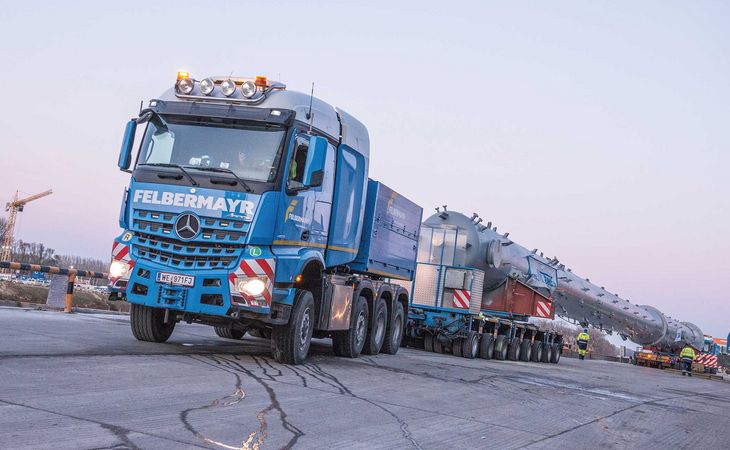 The heavy transports reached total lengths of about 95 meters. 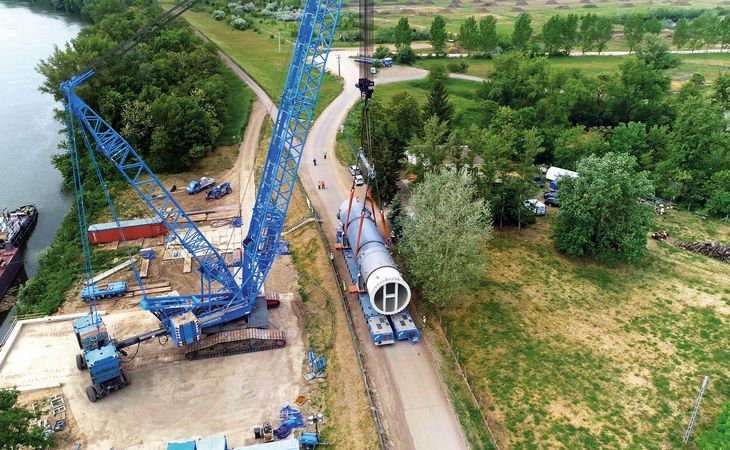 The landing field in Tiszaújváros, located on the river Tisza, was built especially for the handling of components. 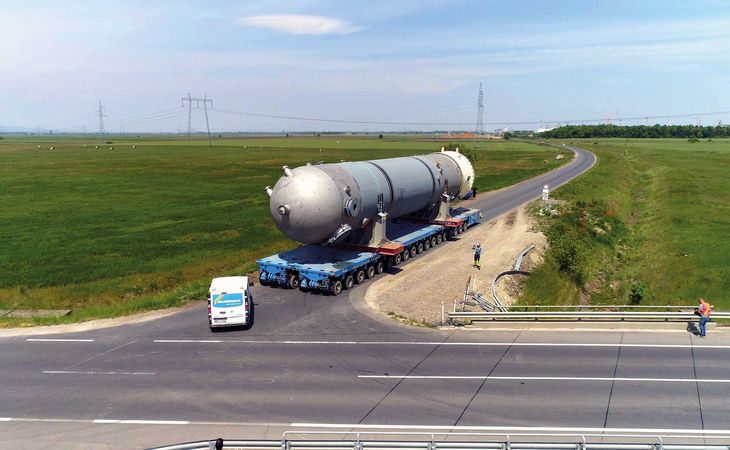 For the last leg of the transport route to Tiszaújváros, two self-propelled vehicles with 18 axle lines and 500 bhp each were used. 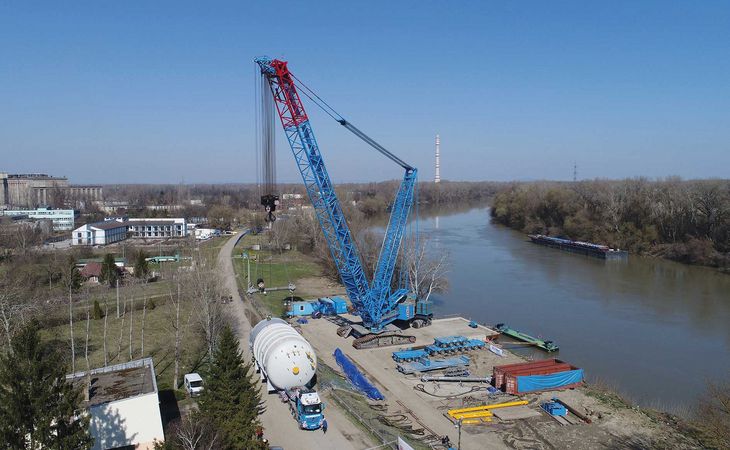 The crawler crane at the transhipment site in Tiszaújváros had an operating weight of around 1,000 tonnes. 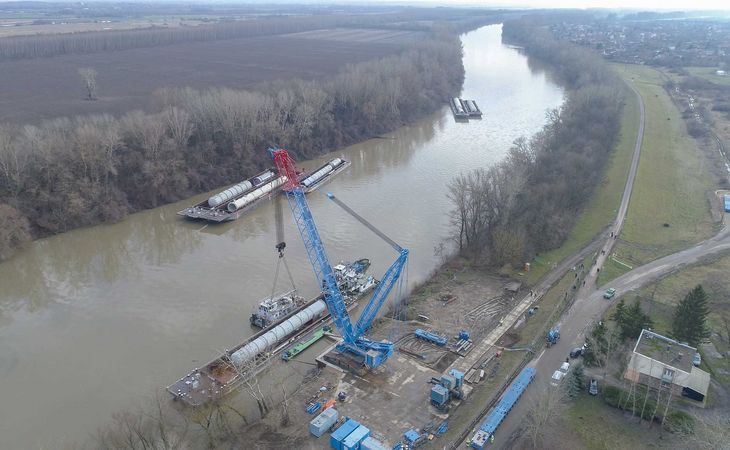 After about five months, it was done. Around 100 heavy transports with piece weights of up to 400 tonnes were transported to their destination on time.
PreviousNext 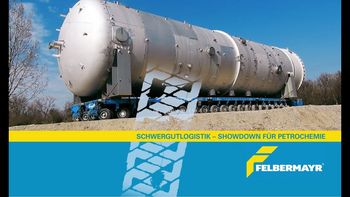