18/12/2020 | In mid-December, Felbermayr relocated an approximately 18-metre-high gantry crane in the port of Duisburg. Thanks to a solution from Felbermayr's new Engineered Solutions division, it was possible to move the 300-tonne crane in one piece using a self-propelled vehicle. This eliminated time-consuming and costly disassembly and mounting work.

In mid-November, Felbermayr's Engineered Solutions division, which was founded in October last year, received an order to relocate a gantry crane in the port of Duisburg. Usually, such a relocation is associated with great effort. An effort that is also detrimental with costs in terms of the crane's standing time. However, this was prevented by a solution from Felbermayr-Engineered Solutions. “This meant the actual relocation of the crane took only about two hours.”

SPMTs and heavy duty towers in combined use

“The core of the solution was the combination of self-propelled vehicles or “SPMTs” (in Engl.: SPMT – Self-Propelled Modular Transporters), with what are known as heavy-duty towers,” explains Divisional Manager Kees Kompier. This type of operation was used for the first time at Felbermayr and required meticulous preparation in terms of the forces acting. It meant that the interaction of the technology used had to be taken into account through engineering know-how. This was the only way to ensure that the crane could be moved safely.

Two parallel SPMTs were used, each with twelve axle lines and a Powerpack as a drive. On top of this were two heavy-duty towers at the front and two at the back, with steel girders set up parallel to the SPMT to lift the load. These were connected to the second SPMT with two horizontal steel pipes each at the top and bottom. The structure was additionally stabilised with diagonally braced steel cables. The transport configuration thus reached the external dimensions of a cuboid with a side length of about 20 metres. “Calculating the suitability of this configuration was somewhat of a challenge,” Kompier notes, adding that the heavy-duty equipment used also had to be modified for practical implementation due to the lack of attachment points.

In the end, however, it was possible to drive under the portal of the 51-metre-wide GANTRY and lift it hydraulically with the SPMTs. The self-propelled vehicles then set off with the approximately 300-tonne load. Since the new crane tracks are about 170 centimetres above the ground level, a temporary embankment was built at the new crane parking area. Raising the 300-tonne load again put the configuration to the test, but thanks to correct engineering, it was perfectly executed. Thus, the crane reached its new “workplace” without having loosened even one screw on the lifting device.

“From lifting to setting down on the crane's new track, about 700 metres away, only about two hours had passed,” enthuses Kompier, proud of “his boys'” achievement.

The operation, which was carried out on behalf of the Port of Duisport, became necessary due to the construction of a new warehouse by the Felbermayr subsidiary Haeger & Schmidt and the resulting change in the layout of the site. 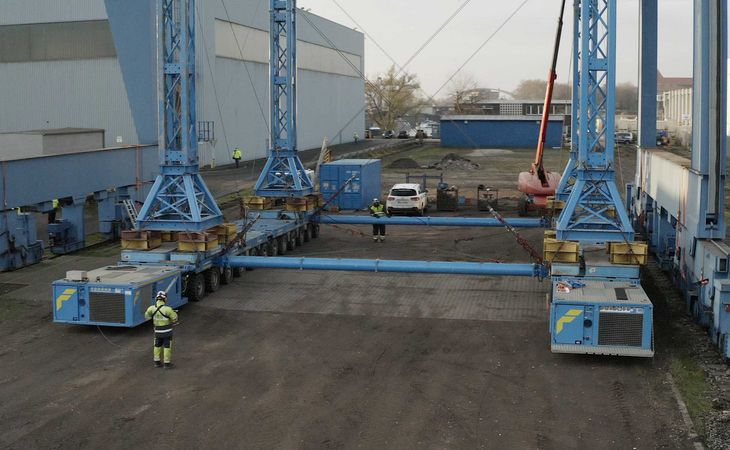 The new Felbermayr Engineered Solutions division was contracted for the relocation of a gantry crane in the port of Duisburg. 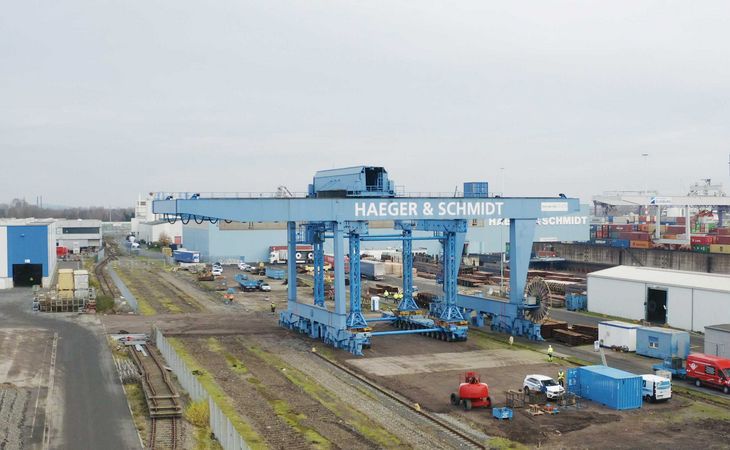 The technology used to move the crane was a combination of SPMTs with what are called heavy-duty towers. 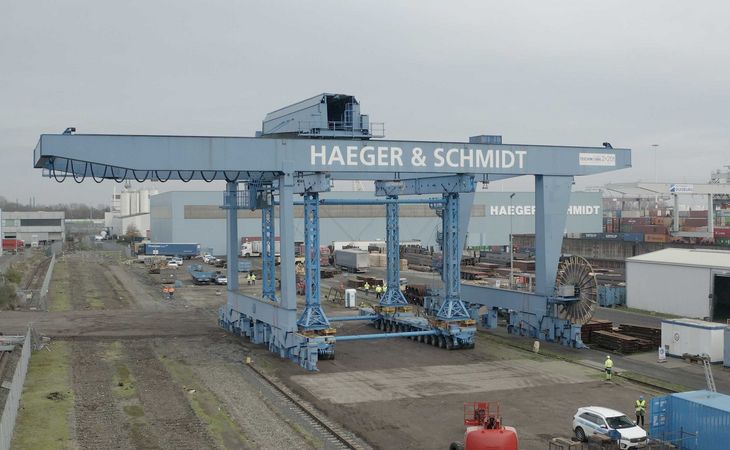 The gantry crane, which is about 18 metres high, was lifted hydraulically by the SPMTs, whereupon they started moving with the 300-tonne load. 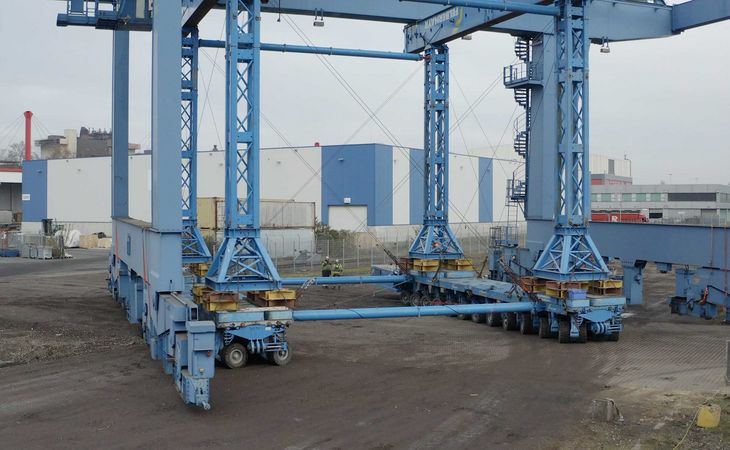 To lift the load, two heavy-duty towers with beam girders mounted parallel to the SPMT stood on two parallel SPMTs, one at the front and one at the rear. 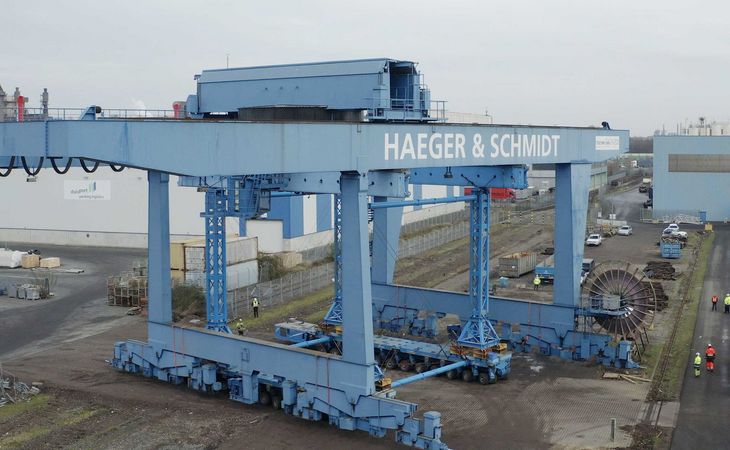 The structure was additionally stabilised with diagonally braced steel cables. 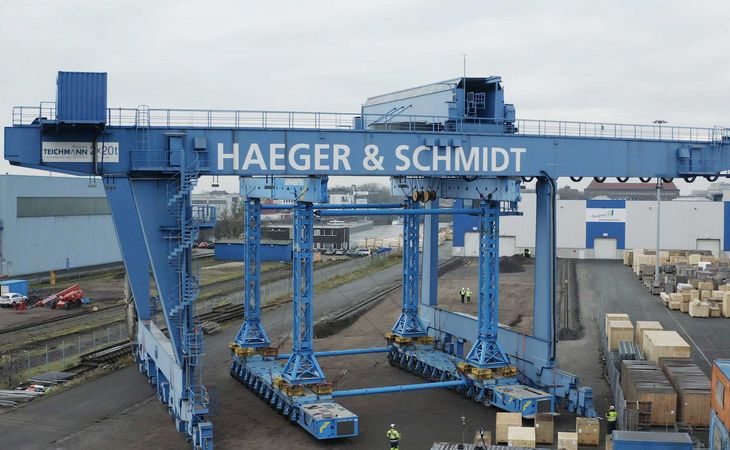 It was about 700 metres to the new crane site. 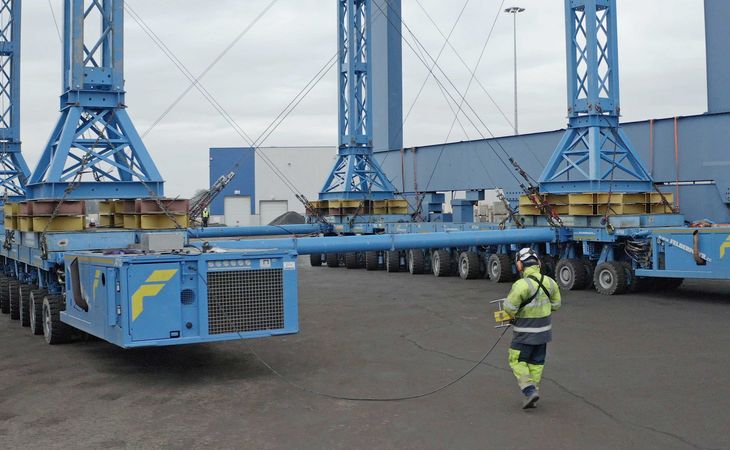 The transport configuration reached the external dimensions with a side length of about 20 metres. 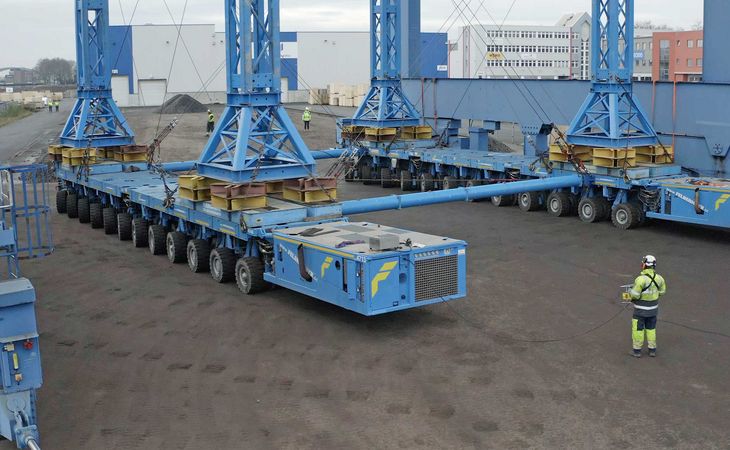 The interaction of the technology used with the engineering know-how made the deployment possible. 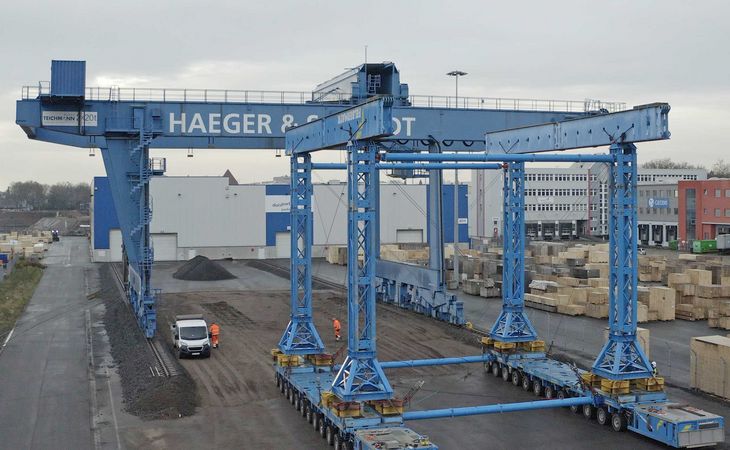 As the new tracks of the gantry crane are about 170 centimetres above ground level, a temporary embankment had to be constructed at the new crane site.
Previous Next 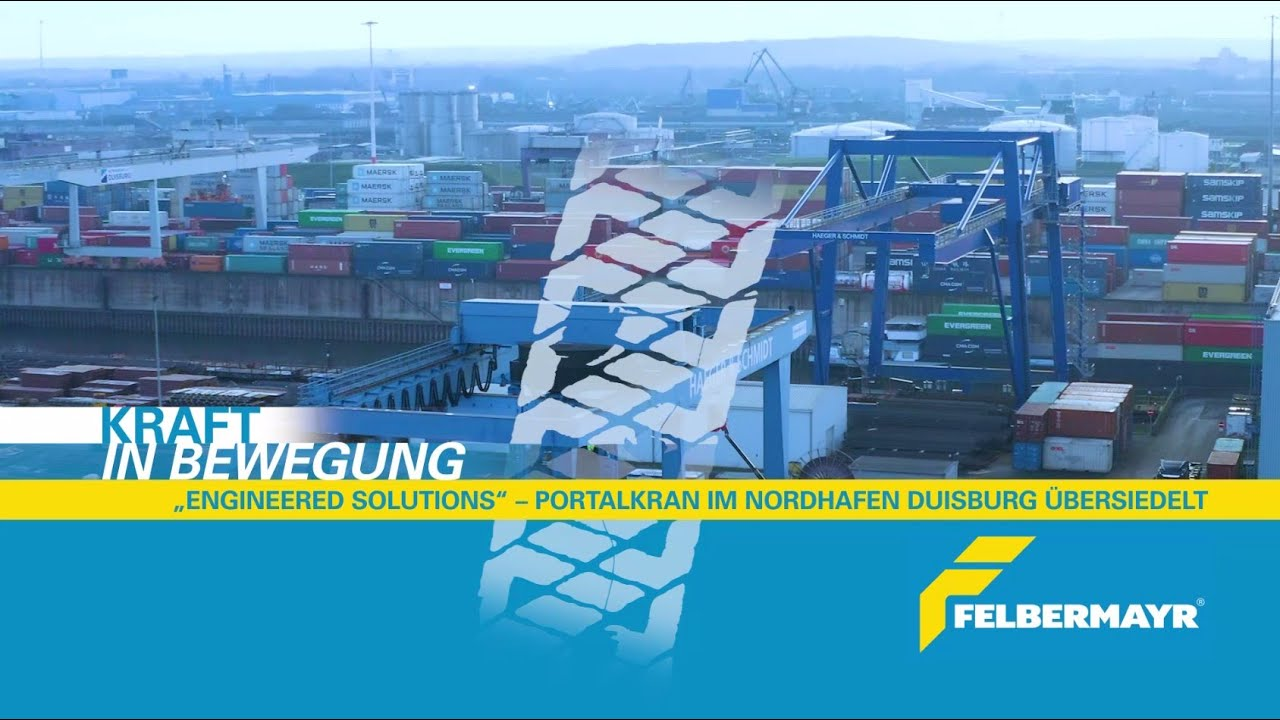