Getting bigger – the new company headquarters

15/01/2021 | In September 2019, Felbermayr began with the construction of its new company headquarters in Wels-Oberthan. All general contractor duties were carried out by the company itself, including the necessary transport and lifting technology services. The interior work is currently in full swing so that completion can be expected in July 2021.

When the ground-breaking ceremony took place in September 2019, the earthworks on the ten-hectare construction site were already in full swing. A total of about 215,000 cubic metres of material were moved. This corresponds approximately to the volume of a rectangle the size of a football field, 50 metres high. Approximately 115,000 of these were accounted for by the underground car park, which holds around 400 vehicles, and the basement areas. This was followed by work on soil stabilisation in the area of the halls as well as securing existing high-voltage pylons in the south of the construction site with Felbermayr specialised civil engineering. In October the earthworks were almost finished again.

Site manager Christian Daxer from Felbermayr Structural Engineering commented at the beginning of the construction activities in November 2019 that the schedule was “very sporty”, not yet knowing what obstacles he and his employees would still be confronted with in the spring of the coming year. But things were still progressing rapidly; the 11,000 square metre underground car park was paved as early as December. Likewise, it was still possible in the past year to produce a large number of the total of 352 sleeve foundations for the supports used for the installation of the precast concrete elements. Some of these uprights, which were erected using cranes and stages rented from Felbermayr, rise up to 15 metres in height and, viewed from an adjacent mound of earth, look like skyscrapers striving to outdo each other in height. “Furthermore, in February we already started with the formwork and concreting work for the underground car park and the basement”, says Daxer. These are ideal pre-conditions for the building to grow rapidly upwards.

In mid-March, a lockdown was triggered by a pandemic, the effects of which are still unforeseeable today – Corona had reached Austria and meant that work on the company's largest single investment to date, at more than 50 million euros, had to be suspended for around three weeks. “At that time it was not foreseeable how things would continue,” says Daxer, recalling closed borders and lack of material supplies. However, the implementation of existing regulations and a corresponding safety concept made it possible to slowly resume work after the threeweek lockdown. But border closures and quarantine regulations also made urgently needed workers on the construction site rare. “You cannot manage a project like this with local staff only, after all” Daxer notes, adding that for a few weeks the supply of materials had also come to a virtual standstill. By the summer, however, a large part of the lost time had been made up for, so that in mid-July a Corona-related reduced topping-out ceremony could be held. By September, the shell construction work on the three halls for the operational areas and the 8,500 square metre office and social building with childcare facilities had been largely completed, so that work could begin on the interior and exterior design. “I am glad that together with my staff I still managed to do this so well”, Daxer says happily and adds with a smile that it is good to be able to hand over the exterior design to his colleague from civil engineering now, because he does not want to make the road to his new workplace himself after all. 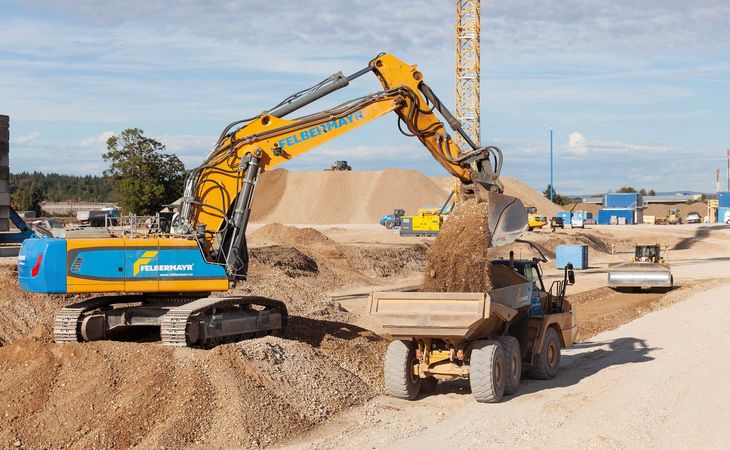 At the beginning of the work there were enormous movements of material. 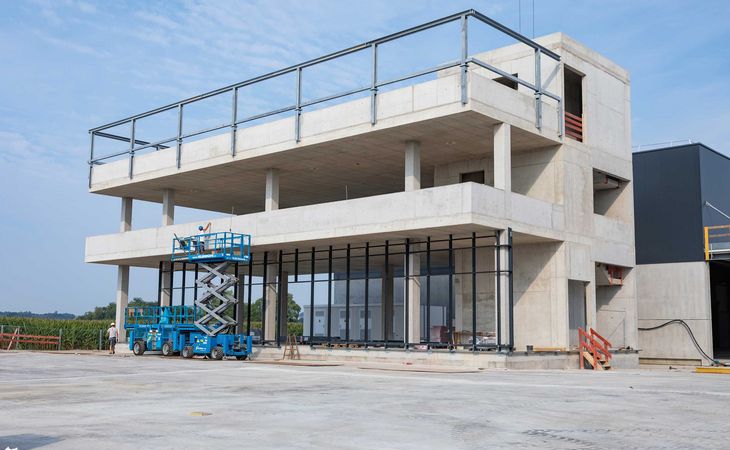 The social building covers 900 square metres and will house a childcare facility with playground (400 square metres), a staff restaurant and a fitness area. 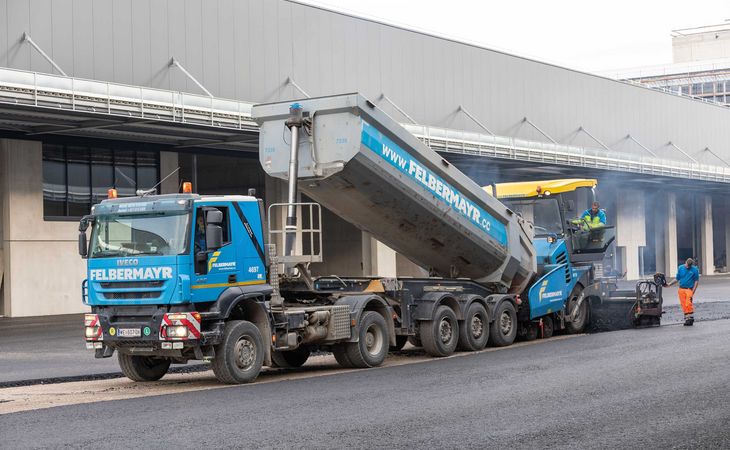 Among other things, around 55,000 tonnes of asphalt from the Felbermayr mixing plant in Haag am Hausruckwere processed to create the outdoor facilities. 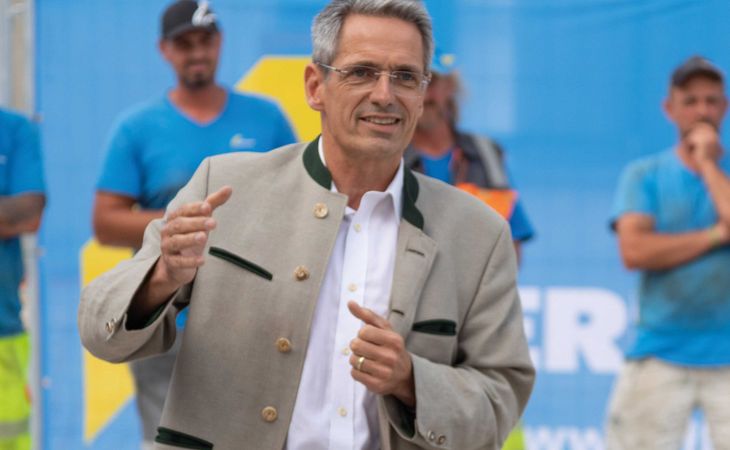 Topping-out ceremony in July: DI Horst Felbermayr is pleased with the construction progress and thanks the employees. 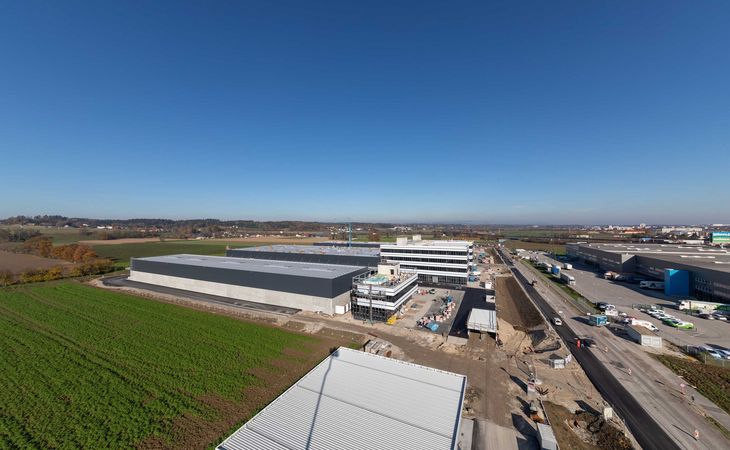 Getting bigger – the new company headquarters 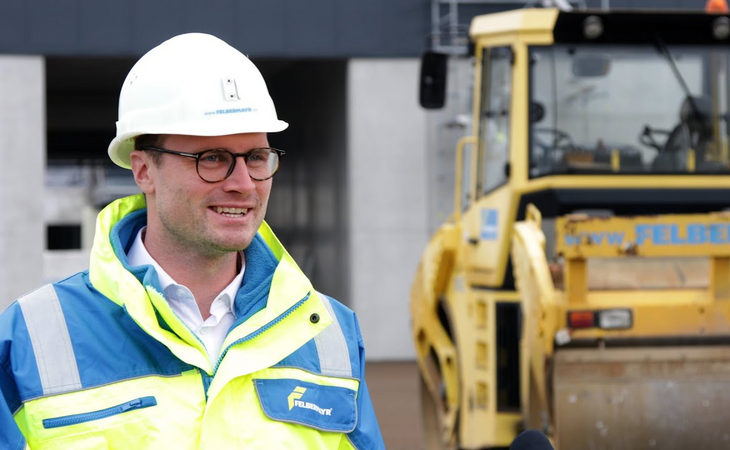 [Translate to Englisch:]
Previous Next 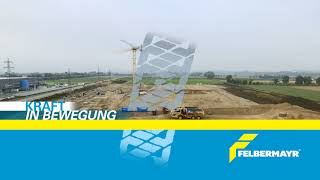