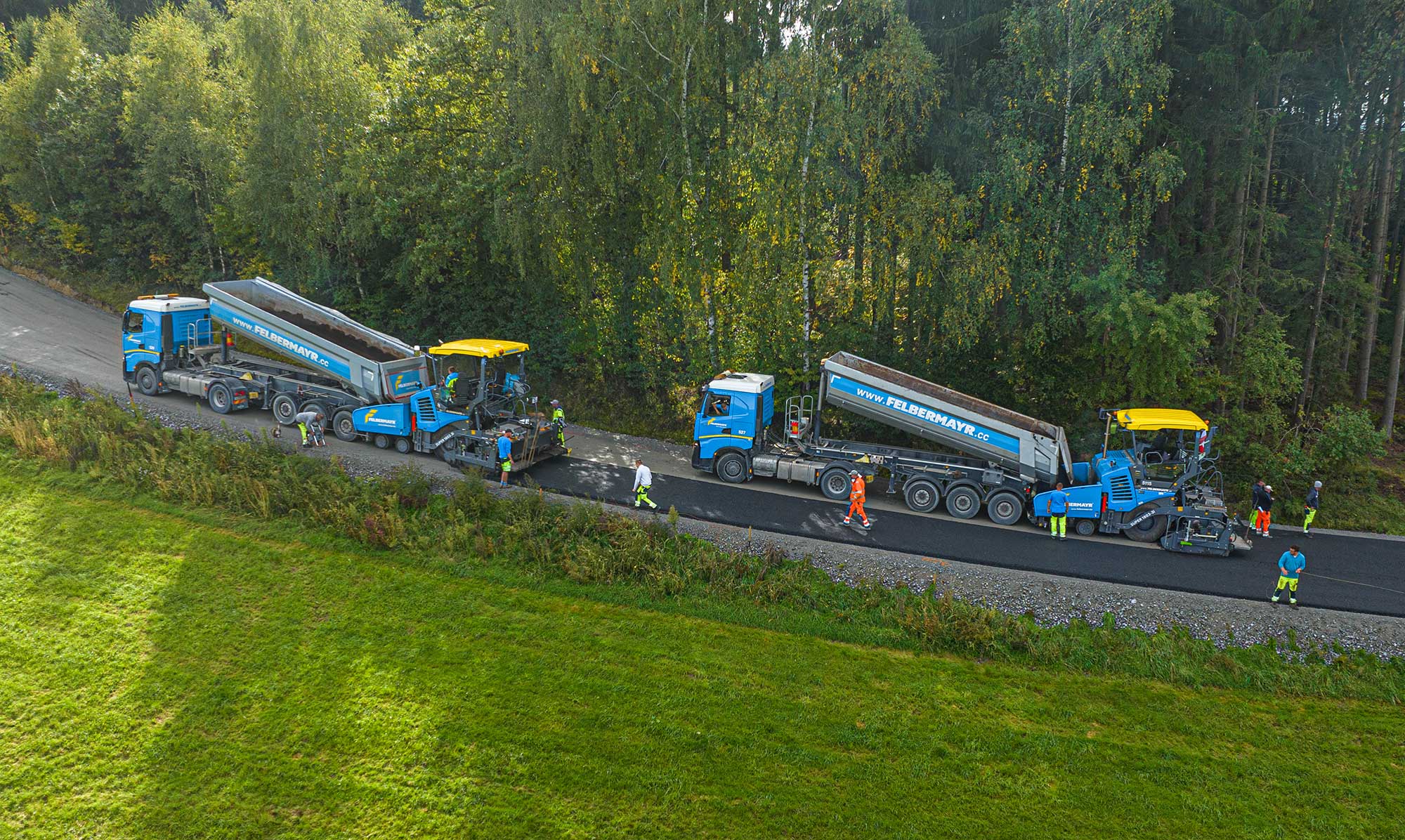 In September, Felbermayr’s civil engineering division began the asphalting work for the expansion of the Enzenkirchener Landesstraße [state road]. The work was carried out by employees of the new Felbermayr site in Raab in cooperation with the Felbermayr asphalt mixing plant in Haag am Hausruck.

I've known this road for around 30 years," says branch manager Günther Luger from the Felbermayr site in Raab, which was founded at the beginning of the year. He also talks about the numerous renovation measures that have taken place on the L1135 in Enzenkirchen over the years. In order to improve road safety, however, the go-ahead has now been given for the general renovation of an approximately three-kilometre-long section of the state road between the villages of Jagern and Andorf.

At the beginning of the work, the existing asphalt was milled down to the unbonded base layer. "This resulted in around 4000 tonnes of milled material," reports Luger. This corresponds to about 160 lorry journeys that were necessary to transport the material to the nearest landfill site, says Luger, referring to the impurities in the binder, which unfortunately meant that the material could not be recycled. Five-axle trucks with a load capacity of 25 tonnes were used for the removal of this material.

The substructure work was carried out by the construction team from Raab's road maintenance department. This was done with a great deal of enthusiasm and heart, and even more sweat, according to the client, the province of Upper Austria. The employees of the Felbermayr site in Raab can only confirm this statement. Because for them, too, the project was a "matter of the heart" due to local relations, and sweat was also omnipresent during their work with autumnal temperatures of 20 degrees and asphalt that was about 180 degrees.

The asphalt is applied in three different layers. The first step was the nine-centimetre-thick base layer. With a length of about three kilometres and a width of more than six metres, for the first layer, this meant that 4500 tonnes of asphalt were needed.

"For the second layer, the so-called binder course, polymer-modified bitumen is added to the asphalt to make it more durable for the special requirements of road construction," Luger explains. Around 2900 tonnes of material were needed for this six-centimetre-deep binder course.

In order to be able to limit the necessary road closure to just a few days, we worked with two seven-man teams to lay the asphalt. The "hunger of the two asphalt finishing machines" was sated by the continuous use of 25 vehicles. These took over the transport of the mix from the Felbermayr mixing plant in Haag am Hausruck, about 30 kilometres away, to the construction site. However, since the laying is faster than the production of the required mixes, the mixing plant was the bottleneck. "With 160 tonnes of mix per hour, the plant does have a respectable capacity," says Luger. However, to keep up with the daily requirement of around 2200 tonnes, the plant had reached the zenith of its capacity. "And also the mixing master," says Luger, because his shift started early at three o'clock in the morning in order to have the material ready by daybreak.

In the spring of next year, the final completion of the project will then take place with the application of a three-centimetre-thick fine surface. "This is also a polymer-modified bitumen. Its special properties include reduced abrasion and an increased service life of the top layer," Luger explains.

​​​​​​​The main aim of the renovation work is to adapt the road to today's traffic requirements by widening it by around two metres to six metres. In addition, the course of the road was also made clearer, thus making a significant contribution to road safety. 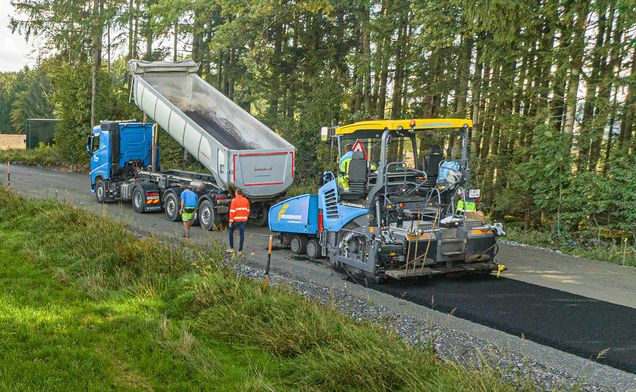 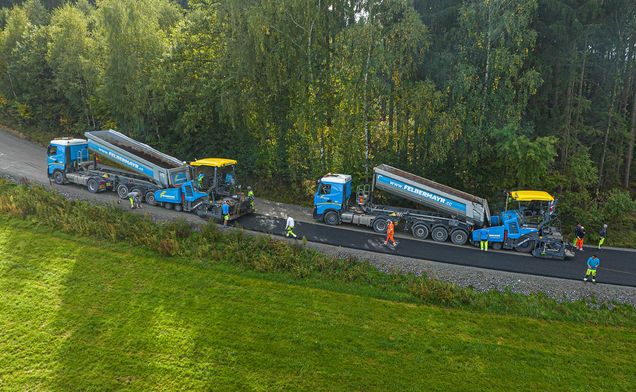 7400 tonnes of asphalt were processed within a few days for the renovation of the Enzenkirchen state road. 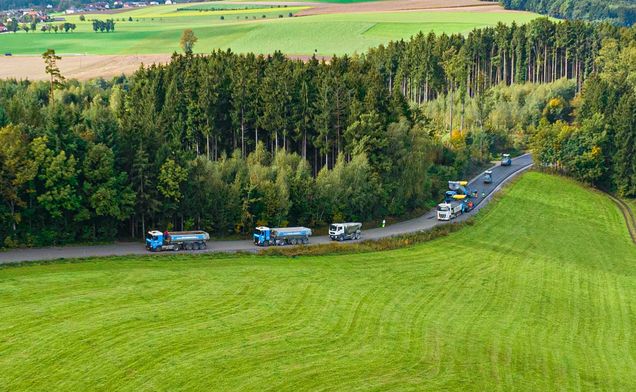 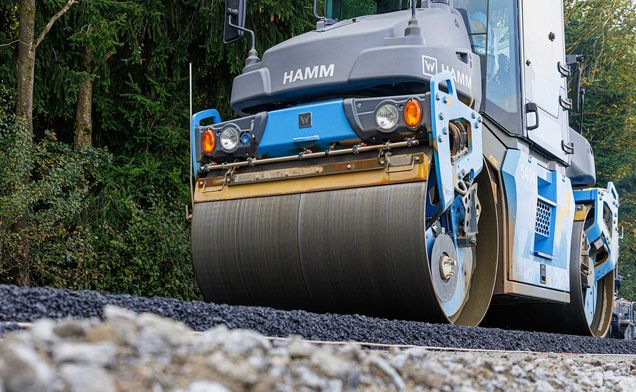 Three road rollers with operating weights of between seven and eight tonnes ensured optimum compaction of the asphalt mix. 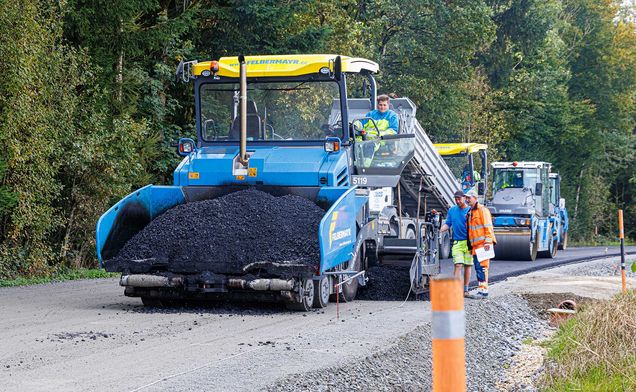 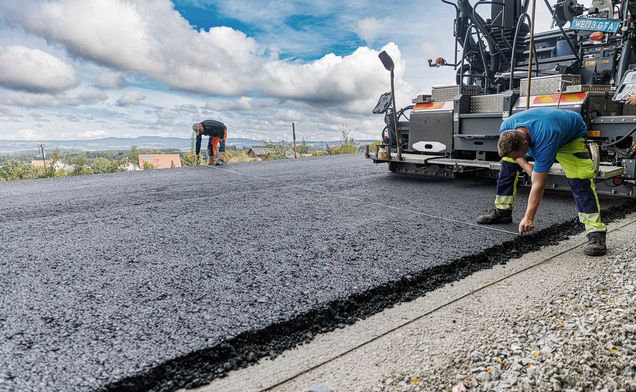 The state road was widened by about two metres to six metres in the course of the renovation measures.
Previous Next
Back to all news