In just three generations, the Wels family-owned company has developed into an internationally significant heavy goods business that has also made rapid progress in the building industry beyond national borders. On Thursday, the company celebrated turning 80 together with around 500 guests at a lavish celebration held at its head office in Wels-Oberthan - home to the company since June 2021.

Inside the 2,000 square metre conversion hall, vehicle configurations are usually being bolted together for industrial components weighing several hundred tonnes. However, it provided a grand setting for the company's anniversary in two senses.

Managing Director Horst Felbermayr is the third generation to run the family-owned company - having taken over from his father, and therefore watched it grow as a child and shaped it with his father over many years: "It's in my DNA - we continue to embody what my parents built," explains the now 51-year-old CEO of Felbermayr Holding. He runs the company together with his wife Andrea and Alfred Feldbauer as commercial director, and is proud of his employees' performance: "Our employees are facing great challenges in mastering these major tasks and keeping up with the rapid development." Thanks to them, the entrepreneur is convinced that the company can continue along its successful path.

Manager Andrea Felbermayr is responsible for the personnel agenda, alongside accounting and financial reporting: "The times are challenging, we currently have over 100 vacant positions in Austria alone." However, thanks to a wide range of measures including childcare facilities, an attractive training programme and a general increase in the appeal of the workplaces, the company is overcoming the challenges in the best possible way.

Feldbauer considers the biggest challenge to lie in allowing the organisation "grow" together with the growth. "We always take care to avoid overstretching the organisation. This means that - in addition to efficient personnel development - we also need end-to-end digitalisation to ensure that processes are efficient." Feldbauer believes it is also important to see the differences between the individual company units as a strength. "They bring diversity and promote prosperous development," says the 60-year-old with conviction.

The business unit for Transport and Lifting Technology is jointly managed by Wolfgang Schellerer, Peter Stöttinger and Christoph Nüssler. Responsibility for the Construction segment lies with Stefan Hielle as Technical Managing Director, and Dietmar Rosenberger who oversees commercial matters.

Magnitude thanks to three modes of transport

Wolfgang Schellerer has been with Felbermayr for over 40 years and played a key role in shaping the heavy transport division, together with the senior partner (who passed away in 2020) and around 100 employees right at the outset: "Back at the end of the 1980s, we had a vision of covering the three modes of transport," explains Schellerer. Development to this end went extremely well after the inclusion of rail as a transport mode in 1994 and the purchase of the heavy goods port from the former Vöest in 1996. "This allows us to service our customers with contemporary sustainability today," says Schellerer with assurance, referring to environmentally friendly transport modes such as water and rail.

The company's service range also includes Felbermayr crane hire with around 530 cranes across Europe and the likewise internationally oriented working platform rental with roughly 3,800 work platforms and lift trucks. The portfolio is further complemented by heavy installation and in-situ transport. "This enables us to relocate entire production lines," explains Schellerer with reference to technical expertise in hydraulics and electrics.

"Our expertise in structural engineering, industrial and power station construction is clearly demonstrated through projects such as this company head office or the nearby Traunleithen power station," Stefan Hielle informs the guests. However, Hielle primarily sees the value of Felbermayr's construction business in its niche building industry offerings: "In addition to general construction services in structural and civil engineering, we have our strengths above all in light, high-alpine specialised civil engineering and - with the Bavarian-based company Hagn - also in environmental technology. Hagn develops solutions in areas including sewer channel renovation and landfill construction.

But hydraulic engineering is also a decisive factor according to Hielle: "Through the acquisition of the Bavarian hydraulics and shipbuilding company Domarin, we have become a major player in hydraulic engineering." At local level, also particularly important are the paving trades with the company West-Asphalt and Danner Landschaftsbau, while the environment and resources division additionally has construction material recycling and gravel and crushed stone extraction in its portfolio.

Andreas Rabl, Mayor of Wels, praised the handshake quality of the decision-makers, which is not disregarded even when things get rough. "This fairness creates trust," explained Rabl, who sees this as the basis for the intra-generational development work.

In order to keep motivated employees and attract new ones to the team, in addition to the measures taken by the HR department, workplaces and the working environment are being optimised; something that is evident at the site in Wels-Oberthan. The anniversary celebration was also the opening ceremony for the company head office, where work is associated with enjoyment and a wide range of amenities. This begins in the morning when employees park in the underground car park that connects all parts of the building, and continues through the working day thanks to the modern and well-equipped workplaces, the freshly prepared lunch in the staff restaurant and perhaps a visit to the fitness suite. Professional childcare is also on offer on-site, to allow for the perfect blend of work and family life.

The company's own real estate business (managed by the family with a great deal of passion and by competent employees) is responsible for this and for the development of the site in general. Senior partner Gisela Felbermayr, Horst Felbermayr and his sister Elisabeth Felbermayr-Schierl mutually agree on the construction measures and implement them in close coordination with the operational divisions. New buildings and extensions are currently being planned and built at five sites and - despite adverse conditions - investments are being made in the future of the company and its employees.

Working at 77 sites in 19 European countries, the employees generate an annual turnover of around 600 million euros.

The specially organised staff party at the company's head office took place on Saturday in glorious autumn weather. The approximately 850 attendees from Upper Austria enjoyed the culinary and entertainment programme in a festive atmosphere. At the same time, events and celebrations were also held at all the other Austrian and international branches for everyone who works for Felbermayr. 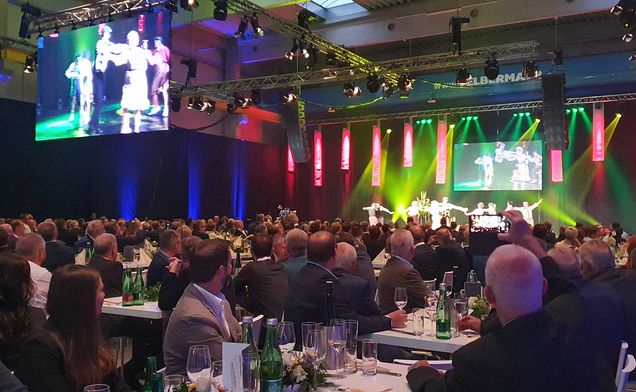 Around 500 guests accepted an invitation to the anniversary celebration for customers. 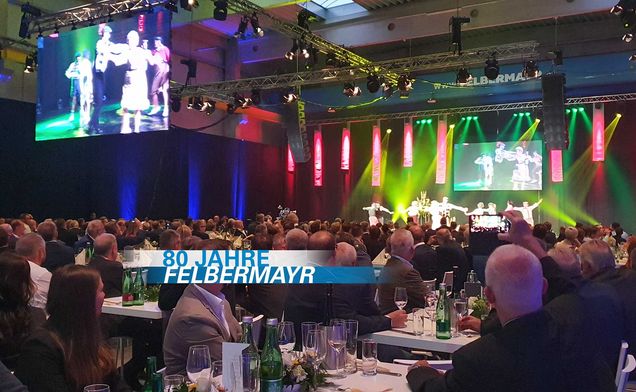 CEO Horst Felbermayr highlighted the performance of his employees in his speech - they would form the basis for success by overcoming major challenges. 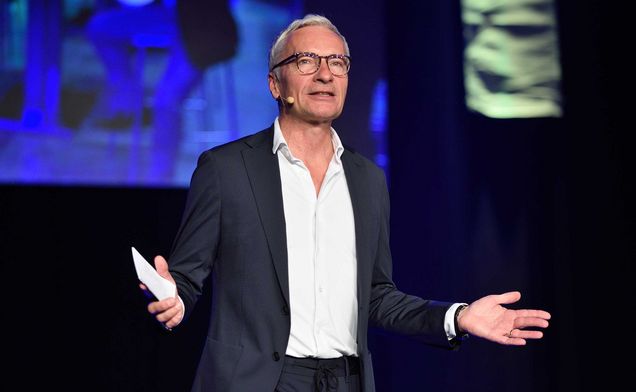 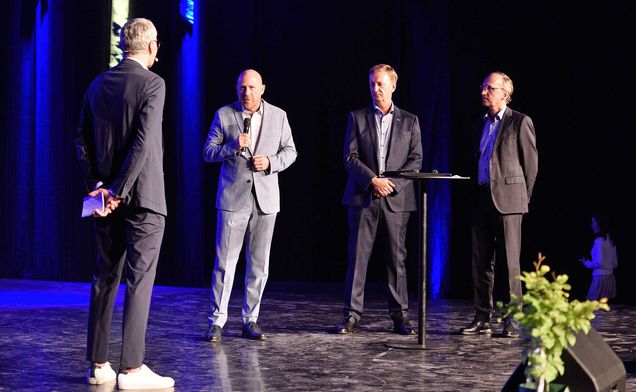 The general management talk provided details about the latest developments. 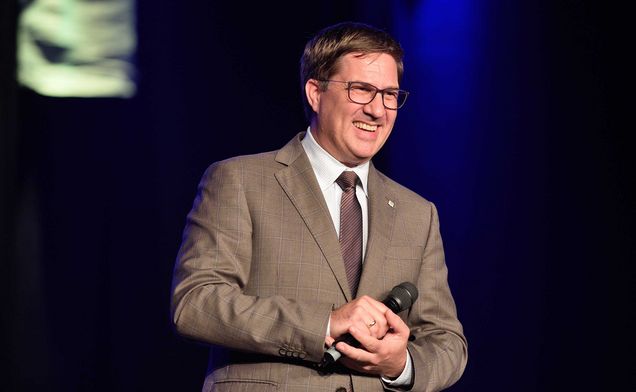 In his speech, Mayor of Wels Andreas Rabl drew attention to the company's handshake quality. 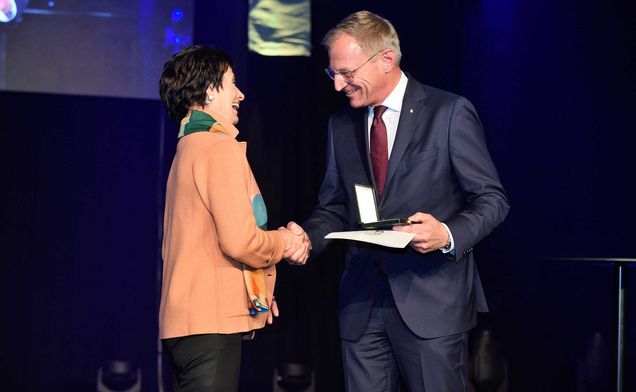 Governor Thomas Stelzer presented senior partner Gisela Felbermayr with the Golden Badge of Honour of the Province, in recognition of the company's economic and social commitment.

Pastor Johann Bräuer blessed a wooden sculpture of St. Christopher. As patron saint of motorists, the sculpture will be given a place of honour in the foyer of the new company head office. 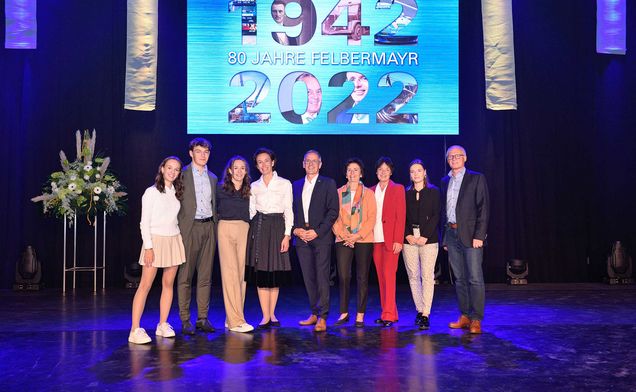 Three generations in one photo: The Felbermayr family. 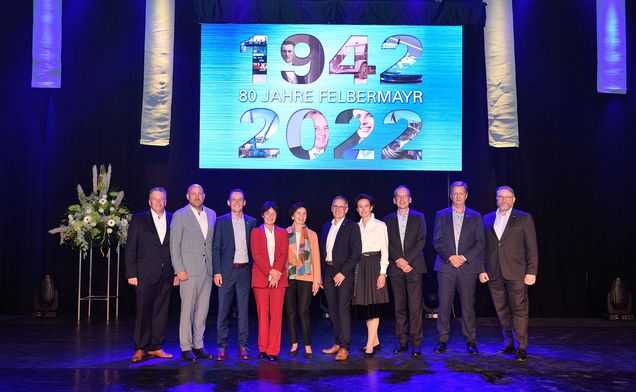 The Felbermayr family with the Managing Directors of Felbermayr Holding on the day of the anniversary celebration. 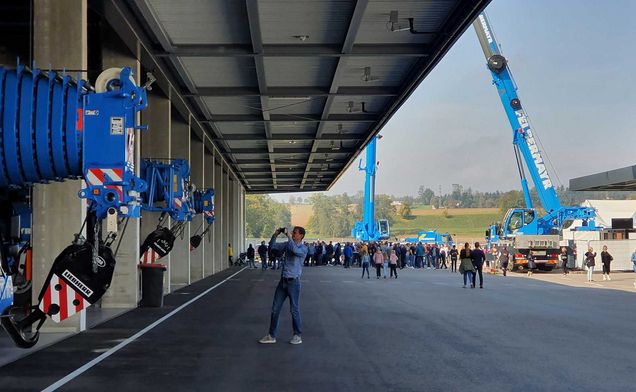 In addition to culinary delights, technology also served as an attraction for the guests. 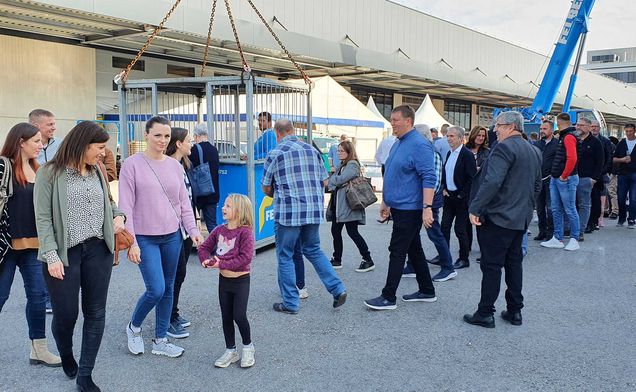 Many were drawn to the ride in a work basket at a height of around 60 metres. 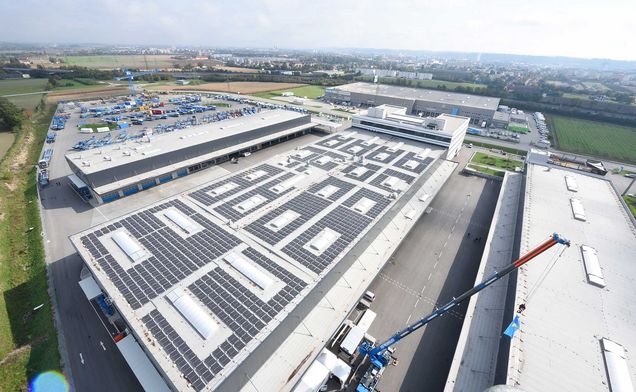 Clear to see thanks to the bird's-eye view: Electricity for the equivalent of 150 households is produced over a 9,000 square metre area every year. 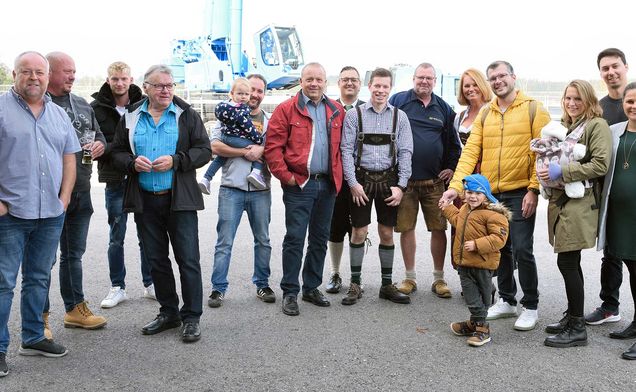 Felbermayr employees enjoyed the party with their families.

The younger guests were particularly attracted to the face painting stall. 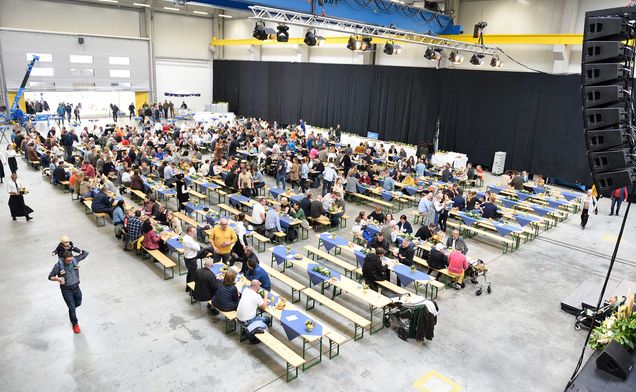 Around 850 guests attended the staff day and had a great time. 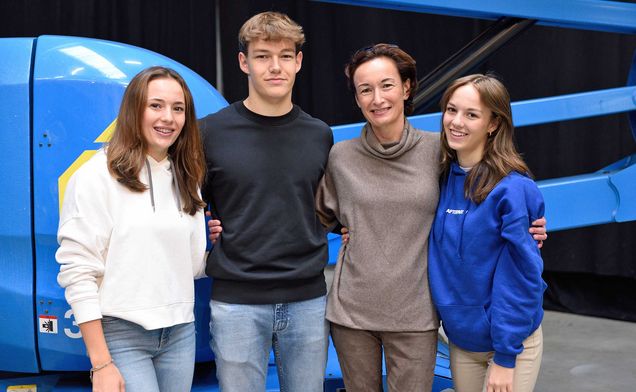 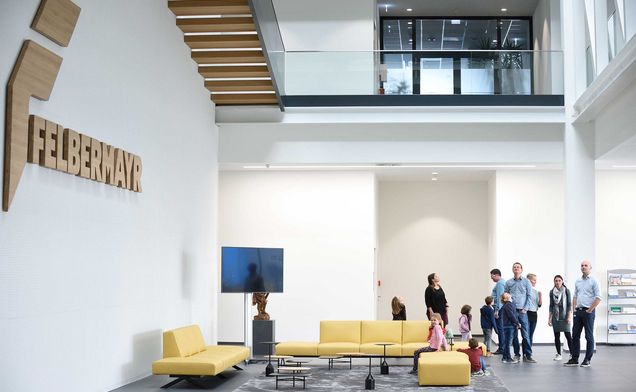 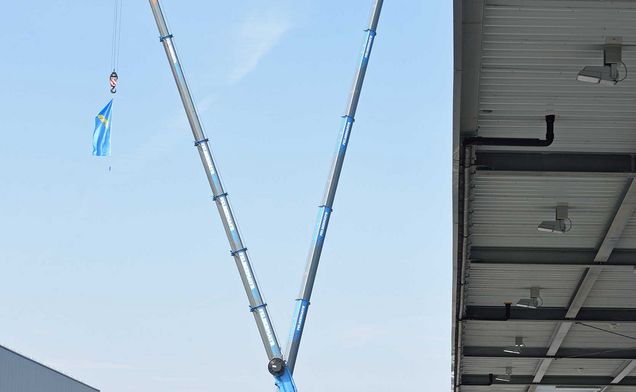 One of the main attractions was the crane ride at a height of around 60 metres. 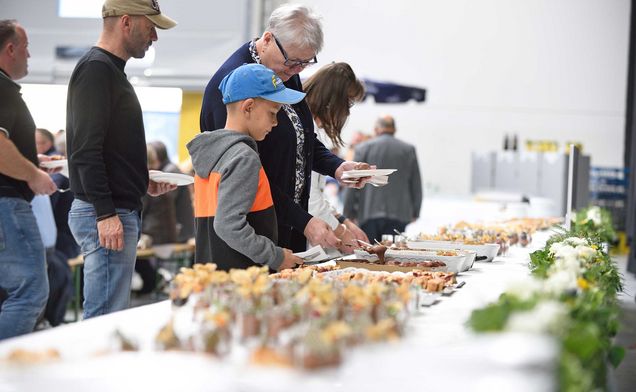 The catering group appealed to the senses of all generations with culinary delights at the staff day. 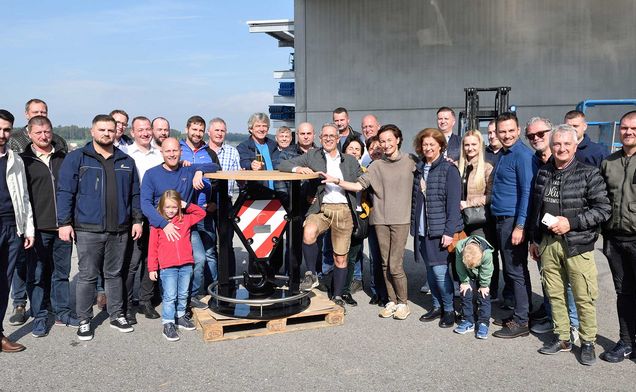 Dressed in traditional lederhosen, Horst and Andrea Felbermayr (centre) enjoyed the staff party together with their employees.
Previous Next
Back to all news