Final stages on the waterway

A gigantic polypropylene plant is currently being built in Police. It is currently one of the largest investment projects in Poland. Best Logistics, a Felbermayr subsidiary, has taken on the contract for the final leg for individual components weighing up to 900 tonnes as part of the worldwide transport logistics. After about twelve months, the contract was completed in October.

Andreas Häfner, co-founder and managing director of Best Logistics, recalls that Felbermayr has been involved with this major project for about six years. At that time, the aim was to prepare a feasibility study for such a plant in Police.

After this study yielded a positive conclusion, Hyundai Engineering Company in Korea was awarded the contract to supply and construct the plant. The logistics company Deugro, also based in Korea, had taken on the task of organising the transport chain to the chemical company Azoty Police's own port. The Felbermayr subsidiary Best Logistics was commissioned for the route of up to 35 kilometres from the Polish seaports of Szczecin, Swinoujscie and Police.

A serendipitous decision, because the company Best Logistics, based in Szczecin and founded in 2000, specialised in its early days in large-volume and heavy transport on inland waterways in Poland. And transporting the large components by road was not possible in this case. However, the order represented a special challenge for the company, which has been successfully operating for over 20 years – and this was also the largest single order for Best Logistics.

"The factory's own port in Police has a water depth of only about 3.50 metres and was just large enough for the large components to be shipped in. For example, in order to be able to land the 95-metre-long, 900-tonne splitter in Police, we chartered ourselves a special RoRo (roll-on, roll-off) pontoon ship in Finland," says Andreas Häfner, describing one of the challenges.

A total of 26 heavy lift cargo ocean-going vessels with around 19,000 tonnes of cargo have had to be unloaded since October 2020, mainly in Szczecin, but also in Swinoujscie and Police itself. This could only be done with the heavy lift cargo vessels' own on-board cranes. The plant components were transshipped onto special RoRo ships, pontoons and inland shipping vessels. "We were not only responsible for providing the cargo space from the seaports to the plant harbour. We were also responsible for the corresponding preparations and for the lashing – i.e. securing the load" Andreas Häfner continues.

At the Azoty Police plant harbour, the "lighter" components were finally unloaded using cranes and the heavy components using the RoRo method and transported on heavy transport units to the respective assembly areas. And after just one year, Best Logistics then took over the last components for the "EGAT Police" project in the port of Szczecin in October 2021: A 200-tonne coldbox was transferred by the shipboard crane of a heavy lift cargo vessel onto a pontoon and then taken to the Azoty Police plant harbour.

The new-build of the large-scale polypropylene manufacturing plant is scheduled to go into operation next year. 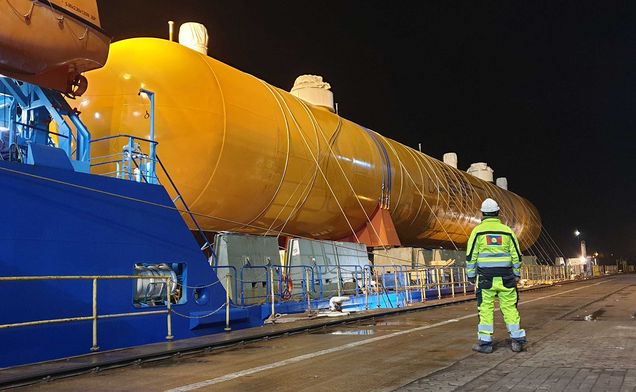 Ready to set down: One of a total of five propylene storage tanks after securing the cargo in Gdynia. With a length of around 90 metres, these containers tip the scales at 600 tonnes. 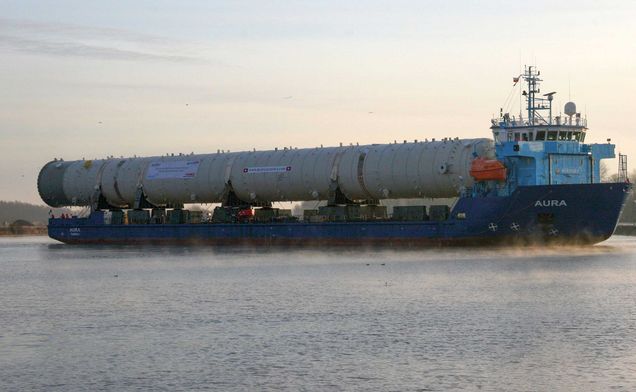 One of a total of 26 heavy lift cargo vessels. The cargo: a "splitter" weighing 900 tonnes and 95 metres in length. 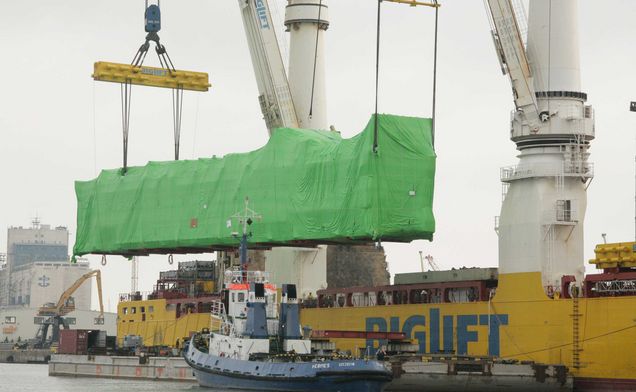 One of the three transshipment points for the total of 19,000 tonnes of cargo was the Polish seaport in Szczecin.
Back to all news