22/02/2021 | In mid-February, the employees of Felbermayr’s Lanzendorf subsidiary, near Vienna, mastered a rare task. A sycamore tree 22 metres tall and 12 metres wide had to be moved by special transport from downtown Vienna to a site about 350 metres away. Two mobile cranes and a low loader with a semi-tractor were deployed.

It was around 1940 when the 22-metre-tall sycamore first rooted in Vienna’s eighth municipal district. Now, about 80 years later, it had to make way for construction of a subway station. The previous year, a tender was announced throughout Europe for transplanting the tree. Some declined on grounds of infeasibility, while others made offers that were too expensive for Viennese Lines, the city’s public transport company. But after many interventions by nature lovers, the tree was to be rescued at the last minute and find a new location. Felbermayr’s special transport department in Lanzendorf got the contract to transplant this 22-metre-tall sycamore. And because an evaluation showed the majestic 42-tonne tree to be in transplantable condition, Felbermayr deployed two imposing mobile cranes to the site.

Special transport and crane deployment in the wee hours

It took only about three weeks to prepare for this massive night-time deployment, which also required numerous permits. According to Thomas Daxelmüller, the biggest problem was the tree’s height: “Transporting it horizontally would have been easy, but was out of the question because so many branches would have broken,” explains Daxelmüller, who is also head of Felbermayr’s crane department in Lanzendorf. This meant a concept had to be worked out for moving the sycamore the 350 metres to its new location with its head held high.

The tree was packed for transport by erecting a sheet pile wall crate around its root area. This was then attached to the crane pulley using textile loops and a lifting frame. “Together with the steel construction, the tree reached a weight of 55 tonnes,” Daxelmüller describes. If one adds the weight of the low loader and the tractor unit, the weight came to almost 86 tonnes. “In static terms, that came close to the road’s permissible load tolerance,” Daxelmüller says, pointing out the existing subway, which is only 1.4 metres under the road, and to the numerous underground lines under the transport route and the crane location. Safety therefore called for live monitoring in the subway tunnel to document any changes that may occur.

At long last, everything went according to plan, and the 80-year-old sycamore reached its new home near the law court in Vienna’s 1st district, before the morning traffic started. For excavating the tree, a mobile crane with a 350-ton maximum load capacity (a Liebherr LTM 1350-6.1) and a 100-tonne ballast did the job. For lifting the tree at the destination, the radius needed was almost twice as wide, at 23 metres. “For that reason an LTM 1450-8.1 with a 134-tonne ballast and a maximum load capacity of 450 tonnes was used,” Daxelmüller explains.

Heavy load equipment for an affair of the heart

“For the people of Vienna, moving the tree was an affair of the heart,” Daxelmüller believes. So, he is also pleased that the minutely planned relocation of this iconic sycamore succeeded. And that despite many doubters who claimed it couldn’t be done. What is forgotten is the great complexity of this special nocturnal transport. In addition to the difficult local conditions, about 3,000 local residents had to be notified in writing, detours and roadblocks had to be arranged, along with police protection and a security team to keep the street open. “But the standing ovations from passers-by and pyjama-clad spectators applauding from surrounding windows, made us ignore all the exertion,” says Daxelmüller, happily thanking all those involved. All that’s left to hope for is that the sycamore will appreciate the effort and soon put down roots again. But we have no doubts about that. 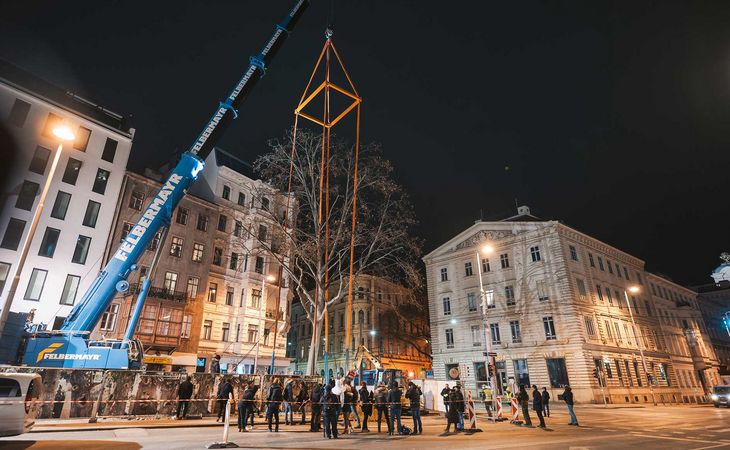 A truck-mounted crane with a 350-tonne load capacity was used to lift the sycamore. 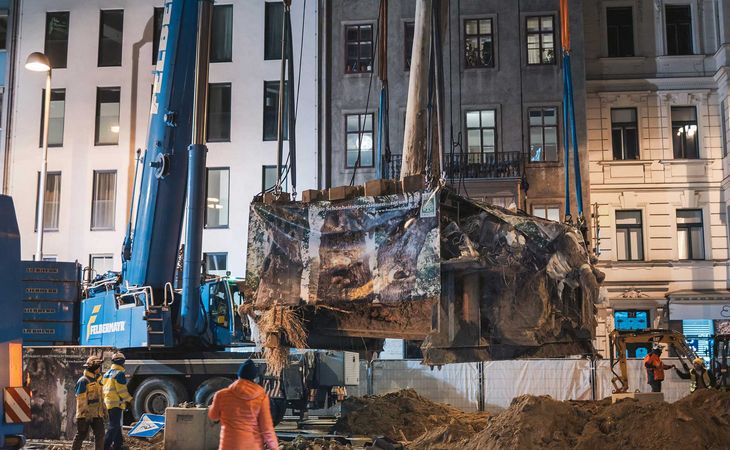 The tree was attached to the mobile crane using a sheet pile wall crate. 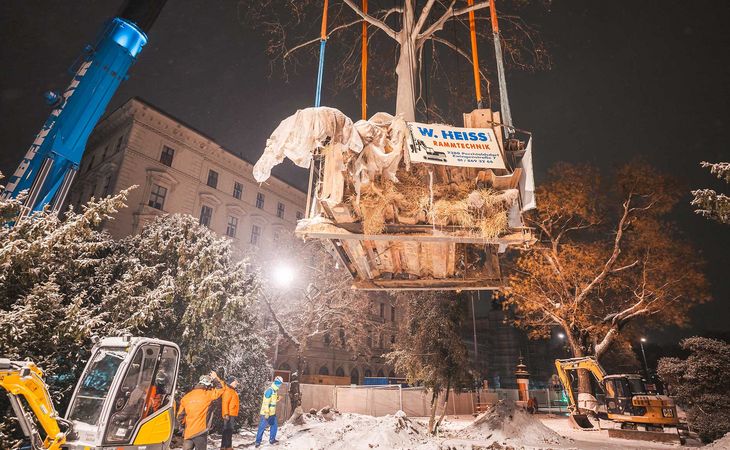 The sycamore reached its rescue “root bed” in plenty of time before the morning traffic started. 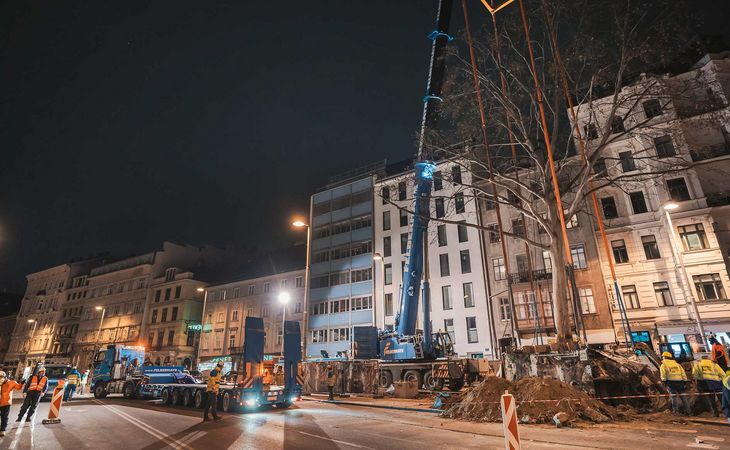 Construction of a subway station made it necessary to transplant the tree using a low loader and truck-mounted crane from Felbermayr. 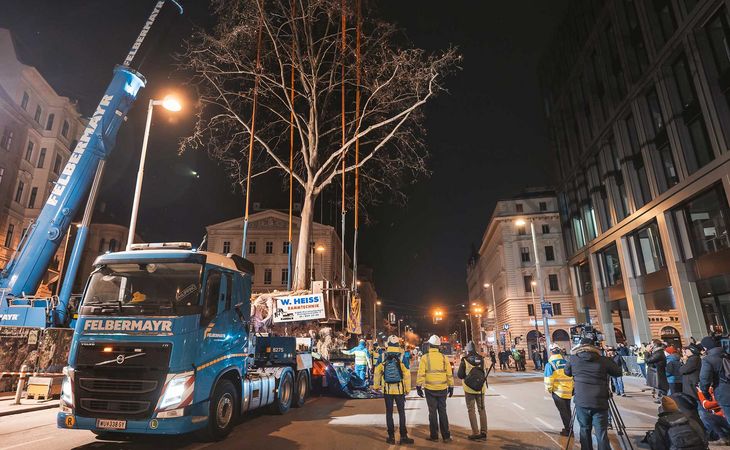 With about 86 tonnes of total transport weight and the great enthusiasm of onlookers, the 80-year-old tree set off on its journey. 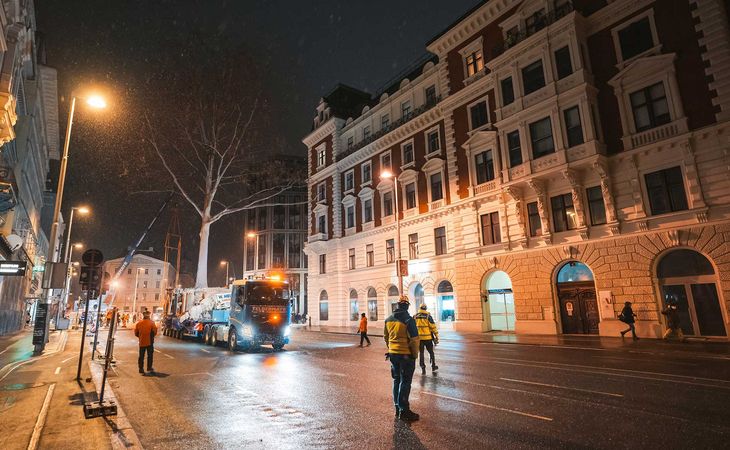 Once the tree was successfully loaded and cautiously secured, the special transport went into action. 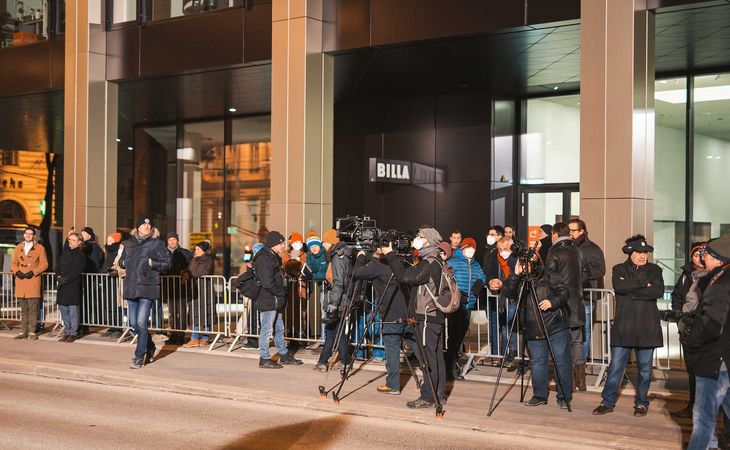 The “tree rescue” with heavy transport equipment was not only a media event, but was also an affair of the heart for the people of Vienna. 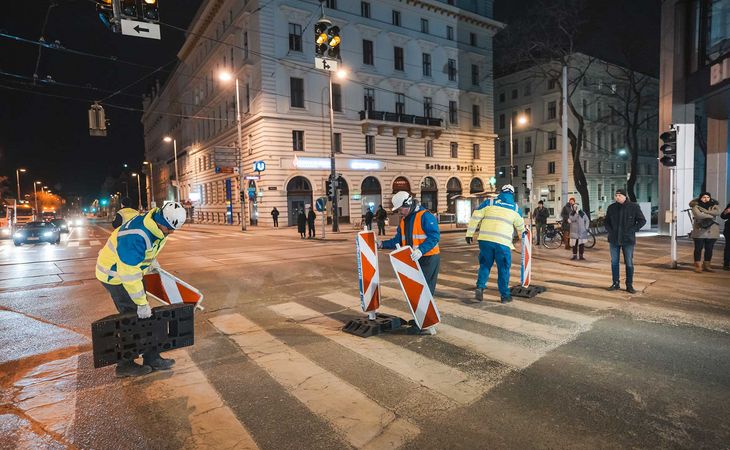 To keep the special transport from being held up, street barricades had to be set up. 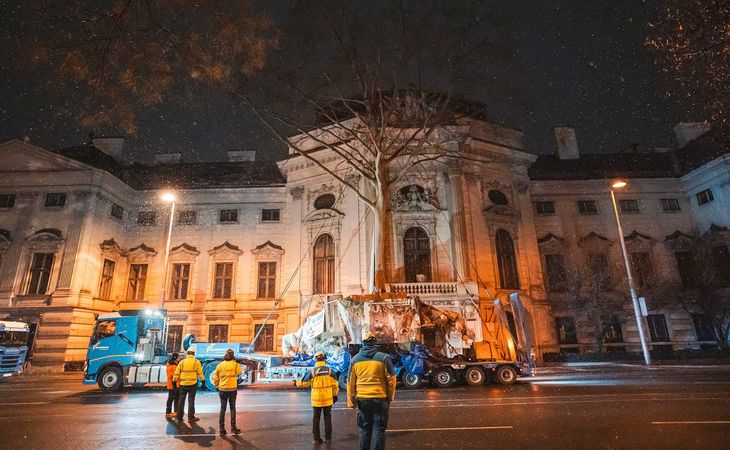 To prevent the 22-metre-tall sycamore from swaying, abrupt braking absolutely had to be avoided.
Previous Next