The Engineered Solutions division of Felbermayr was awarded the contract to dismantle an old flood barrier near Ladenburg at the Neckar. The challenge: With extreme tight space, it was necessary to disassemble the roughly 210-tonne structure directly on the water. July arrived and the time had come - the project began to cause a stir as things heated up and a balancing act played out on the water.

A look at the situation on the construction site prior to dismantling work reveals the problem: The old barrier - which was put into operation in 1931 - is sandwiched between the new flood barrier and a bridge, is around 45 metres long and weighs about 210 tonnes. "Our task was to remove the flood barrier in a single piece, which meant we needed to find a solution that would allow the barrier gate to be raised from the bearings on site, then horizontally rotated on the water for removal," explains Felbermayr divisional manager Kees Kompier from Engineered Solutions.

The whole of Ladenburg came out in July to witness this incredible dismantling of the 45-metre-wide and roughly 5,1 metre high barrier. After all - it had served to protect the residents of the several kilometre-long side channel from floods for almost a century.

Disassembly on the water

In order to perform disassembly directly on the water, the experts from Felbermayr used a 66-metre-long and eleven-metre-wide pontoon as a floatation device. This was extended with side pontoons on site to guarantee the required stability. "Positioned lengthwise on it were two six-axle SPMT modules (self-propelled modular trailers), each with so-called "elephant feet", which were fitted with two steel beams that would later bear the flood barrier. A climbing jack system consisting of four 3.8 metre high jacking towers was also on hand to assist. The barrier was to be subsequently placed on this system and then driven out according to the engineering plan," explains Kompier.

Once the preparatory work was complete, the pontoon assembly was positioned precisely beneath the old flood barrier by six winches, after which it immediately took over around twenty percent of the total weight by pumping out ballast water.

The next day, the flood barrier was lifted out by further deballasting water bailing and use of the stroke of the SPMT module. "It was raised around 1.7 metres so that the structure was roughly ten centimetres clear of the building level, after which it could be rotated 26 degrees in the direction of the climbing jacks by the SPMT and lower down on the towers," explains Kompier.

Once lowered onto jacks, the flood barrier had been jacked down till 1.2 metres above deck level, the SPMT modules took over the load once more and were lowered completely. This, and taking on the ballast water, brought the pontoon assembly to a sufficiently low level that the old barrier could be manouvered beneath the new flood barrier with "clearance of around fifteen centimetres" and floated to the quay by means of a push-boat.

Finally, preparations were made for transportation on the Neckar to Mannheim. To this end, the barrier was placed directly on the stacking lift system and the (now superfluous) steel beams and the SPMT modules were dismantled and loaded for removal.

Once the cargo had been jacked down to the deck level of the pontoon, it was possible to start tackling the final stage of the success story - after clearing the Neckar due to the annual closure for maintenance work, the old flood barrier reached the transhipment point in Mannheim the same day, where it was transported onwards for recycling.

"I am always delighted when we overcome such challenges. But with an expert team, creativity, precision and outstanding technology, we make even the seemingly impossible possible," concludes Kees Kompier. 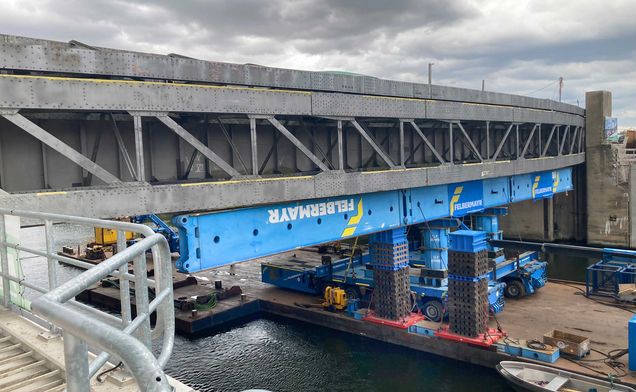 The coordinated use of SPMTs, climbing jacks and a pontoon was vital for floating out the flood barrier. 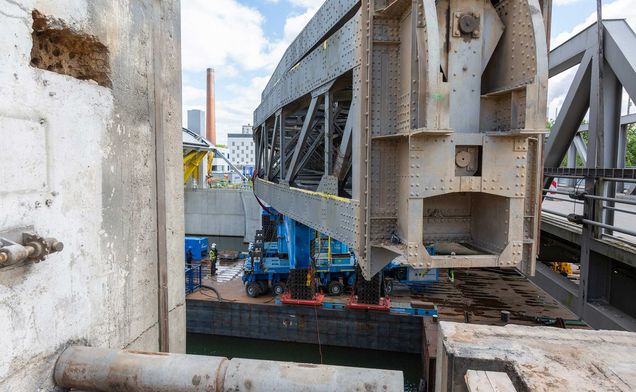 Climbing jacks were used to lift the gate body from the bearings. 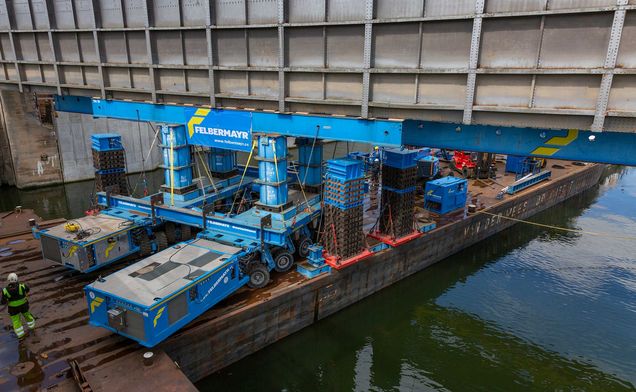 Using SPMTs coupled in parallel meant the flood barrier could be turned on the pontoon. 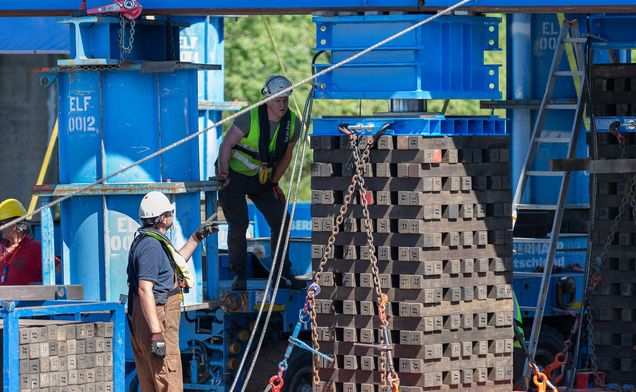 The climbing jacks were crucial components for lifting the barrier, which weighed around 210 tonnes. 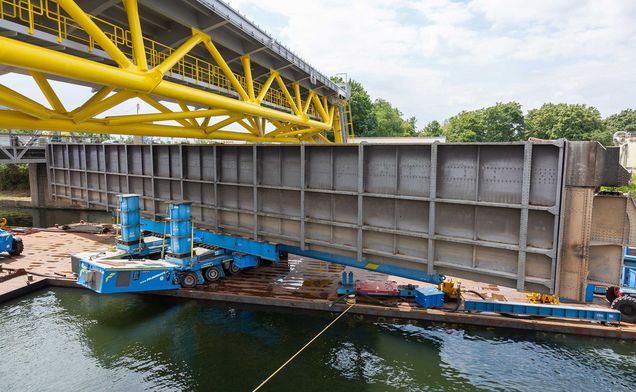 The old flood barrier was floated out downstream, beneath the new barrier.

The precision of the essential calculations became apparent as the barrier was floated out – there was just a few centimetres to spare between the old and the new flood barrier. 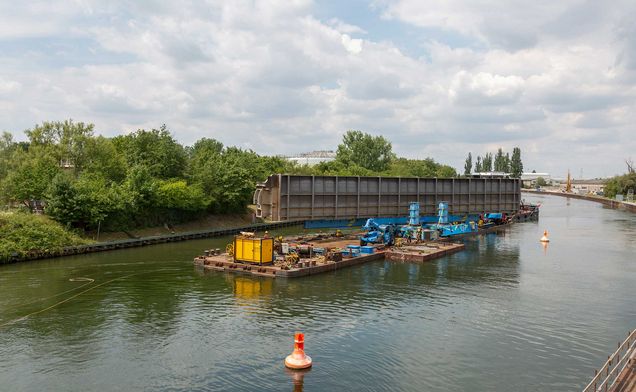 Using a push-boat, the flood barrier was brought to the transhipment point for its final journey.
Previous Next
Back to all news